In July a delegation from the Iraqi province of An-Najaf (southwest of Bagdad) visited the Netherlands. On July 5th they came to the capital city of Overijssel Zwolle. They were welcomed by Andries Heidema, the provincial executive chairman in Overijssel. The delegation consisted of the Head of Spatial Planning, the Head of transport and traffic planning, a lawyer and a technical designer. They were very  curious about the cooperation between municipalities, the province and national government and about taxes and budgets. They also wanted to know more about integrated planning of infrastructure, especially in sustainable mobility (SUMP on regional level). In Iraq one of the problems is, that mobility is approached very unilaterally. Only from the perspective of cars, not in conjunction with other modalities like transit and bikes. The other issue is that solutions in infrastructures are approached from only the local point of view, without having a broader Network plan or Mobility vision. Therefore, no integrated choices are made. In the meantime car-traffic is increasing very fast. This leads to safety problems: In the city of Najaf (1 million inhabitants) alone there were 300 traffic casualties over the last two years. For comparison: In the city of Amsterdam (850.000 inhabitants) there were 30 traffic casualties in the last two years.

The province of Overijssel shared her knowledge and experience in administrative cooperation,  planning of mobility and asset-management. The presentation about integrated planning (Vision of the Environment, Integrated Network Vision) was prepared by Richard ter Avest from the Iganga Foundation. The story was told by Mobility Team leader Karsten ten Heggeler from the Province of Overijssel.

The reactions of the Iraq delegations were very positive. They were very inspired by the way of working together with municipalities in Overijssel. The question is: will there be a cycle track in  Najaf soon? They see a lot of chances in the big cities, but a problem is the temperature. In summer temperatures can run up to almost 45 degrees Celsius. A car with airconditioning is more practical then and therefore more common. 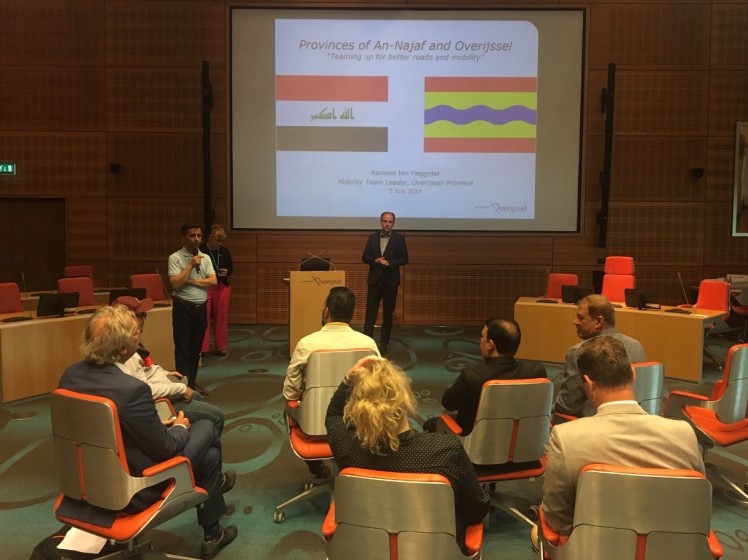